Help us Spread the Word

Today the nation observes Human Trafficking Awareness Day, an opportunity to shed light on the growing issue of modern-day slavery worldwide and throughout the United States. The International Labor Organization estimates that worldwide 20.9 million people are victims of forced labor, trapped in jobs and exploitive conditions into which they were coerced or deceived and which they cannot leave. Human trafficking can also be regarded as forced labor.

Just a few days ago, President Obama declared the entire month of January “Human Trafficking and Slavery Prevention Month,” stating, “As Americans, we have long rejected such cruelty. We have recognized it as a debasement of our common humanity and an affront to the principles we cherish…we have made it a national mission to bring slavery and human trafficking to an end.”

Human trafficking is lucrative and fairly low risk; police arrest records show that young women can be sold to brothel owners in North America for as much as $16,000 each.

In the U.S., an estimated 14,500 to 17,500 women and children are trafficked into this country each year, primarily for the sex industry. Traffickers typically lure women to the U.S. with false promises of jobs as waitresses, nannies, models, and factory workers. The victims are prevented from leaving by security guards, violence, threats, debt bondage, and/or retention of documents.

Data collected by the Human Trafficking Reporting System, which collects information from state and local law enforcement agencies in the U.S., reveals that:

The Salvation Army firmly believes that the abuse and exploitation of human beings through any form of human trafficking is an offense against humankind and against God. This commitment emerges from The Salvation Army's mission - to preach the gospel of Jesus Christ and meet human needs in His name without discrimination – beginning when founders William and Catherine Booth began protecting women and children from the horrors of the industry in the late 19th century. In 2011 alone, The Salvation Army served 323 victims of labor and sexual trafficking through its victims’ assistance programs based in the United States 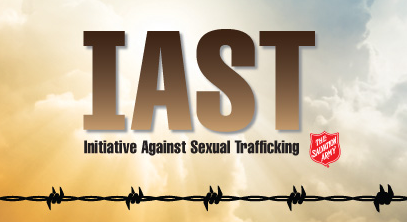 The Initiative Against Sexual Trafficking (IAST) is a program of The Salvation Army that exists to help, create and equip the movement for the abolition of sexual trafficking and commercial sexual exploitation. This program helps develop and provide information and resources to help other Abolitionists in their efforts to educate the public about the devastating realities of sex trafficking and the effects of life in the sex industry. IAST’s website offers a plethora of resources and ways that you can get involved and join our efforts. Please visit www.IAST.net to get informed, to educate, advocate, and give back!

"Speak up for those who cannot speak for themselves, for the rights of all who are destitute. Speak up and judge fairly; defend the rights of the poor and needy.”

The above facts and statistics were provided by IAST.
Tags: International, Human Trafficking