Salvation Army Lines Up to Serve 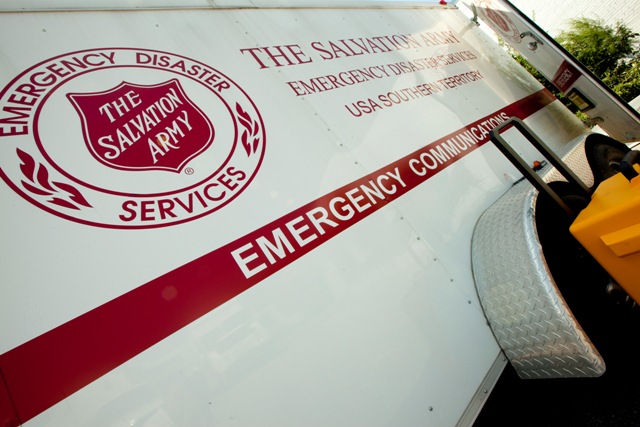 Estimated to be over two miles wide at one point, a devastating tornado with winds up to 200 mph struck just south of Oklahoma City this afternoon, ripping apart homes and other buildings in populated areas.

The Salvation Army, mobilized and serving since before yesterday’s bout of tornadic activity, is currently organizing disaster response units to serve hard-hit areas in Central Oklahoma, including Moore and South Oklahoma City.

In Pottawatomie County: The McAlester, OK and Shawnee, OK disaster response teams served multiple locations in the Shawnee area, including devastated neighborhoods and rural areas throughout the night and day.  Around 3:00 PM all units were pulled into safety as tremendous storms threatened the area. Response teams will be out once again upon an all-clear.

In Lincoln County: The Enid, OK canteen provided breakfast, lunch & dinner to the Carney, OK area throughout the early morning hours and all day today.

In Cleveland County: The Central Oklahoma Area Command Disaster Service Unit responded to the Little Axe area with breakfast, lunch & dinner today.  The Salvation Army was responding, even as one of our Salvation Army family member's home was destroyed.

“The Salvation Army is calling on everyone to pray for all of those impacted by the devastating tornadoes in Oklahoma,” said Major Steve Morris, Divisional Commander of the Arkansas-Oklahoma Division of The Salvation Army.

Donations in the form of checks designated to Oklahoma Tornado Relief may also be mailed to: