This post is being featured in recognition of White Ribbon Against Pornography Week (WRAP). This week is dedicated to raise public awareness about our culture’s pornography problem and it’s devastating affects to adults and children. The annual event creates a useful opportunity to also raise the issue of pornography within the Church, and to call all Christians to renewed lives of sexual purity and freedom. This year, the event will take place from October 27-November 3. 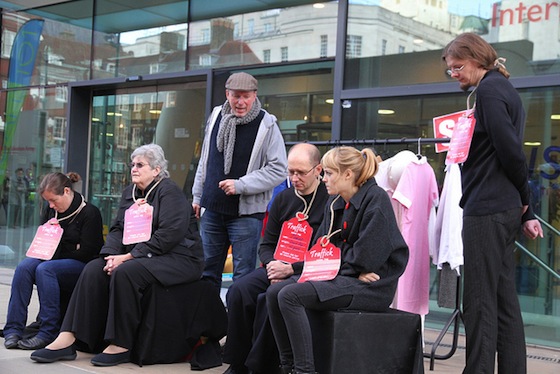 “Slave sale” in front of The Salvation Army to raise awareness of human trafficking.

Hundreds of commuters and tourists walking past The Salvation Army’s International Headquarters in central London on Friday were greeted with the sight of human ‘slaves’ being sold at a makeshift market stall.

It was, of course, not a real slave sale – it was an attempt to draw attention to the various ways in which people of all ages and backgrounds can be trafficked and forced to work for little or no pay, often under threat of violence.

The slave sale was organized by Salvation Army representatives from the United Kingdom and Republic of Ireland to highlight Anti-Slavery Day, which is marked in various ways across Europe on the 18th of October.

The Salvation Army in the UK works with the Government to support victims of human trafficking, providing secure accommodation when needed and care and support to meet the needs of this very vulnerable group of people in England and Wales. This is just one of many Salvation Army projects worldwide that address the causes and outcome of trafficking.

:: To find out more about anti-trafficking efforts around the world, please click here.

:: Click here to learn about what’s being done to help victims of trafficking in the US.