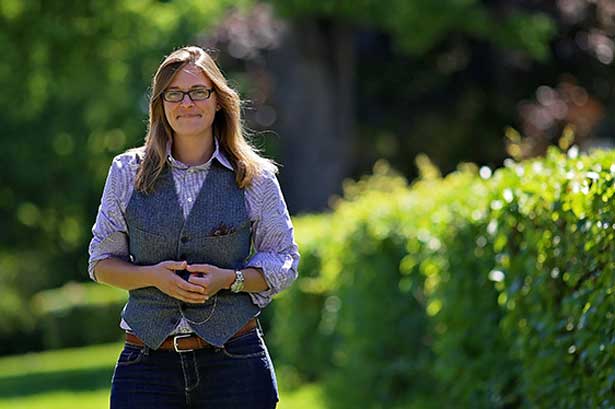 For the first time in 100 years, The Salvation Army’s youth housing facility in St. Paul, Booth Brown House, is being led by someone other than a Salvation Army officer.

That person is Nicole Mills, a 34-year-old originally from Nebraska. Youth outreach has been her life for the past 16 years. Raised on a cattle farm and horse ranch – “It was sort of a magical childhood,” she said – Mills moved to Minneapolis at age 18 to work with homeless youth at a teen drop-in center. She did more of the same in Portland, Oregon, during her 20s, and later moved back to Minnesota to finish college. She has a bachelor’s degree in urban studies and a master’s in public policy, both from the University of Minnesota. 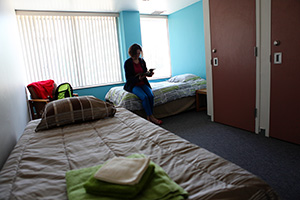 As program director of Booth Brown, Mills oversees 25 staff members and the dozens of homeless youth they serve. The facility’s permanent housing wing features 35 efficiency apartments for youth ages 16 to 25, while its emergency shelter includes 12 beds for youth ages 18 to 21. 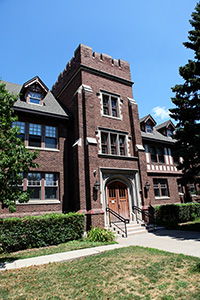 “Last month we had one empty apartment, and that was only because of a flood,” Mills said. “The emergency shelter is filled up almost every night.”

Our SalvationArmyNorth.org team sat down with Mills to learn more about her background, the challenges and rewards of serving homeless youth, and more.

What led you to serving homeless youth?

I moved to the Twin Cities when I was 18 years old and started working at a coffee shop in downtown Minneapolis. There was a youth drop-in center nearby that I also started working at, doing peer health education.  I learned more that first summer then I ever had in my entire life. I met people who were homeless, people who were living with HIV, folks whose lives were so different than mine. I also saw strength and passion.  I learned from my own experience and the youth experiencing homelessness around me that with positive adult relationships, high expectations, and meaningful involvement in community that change happens at all levels. I am forever grateful for the adults who mentored me when I was young and gave me opportunities to learn and grow. I want to continue to provide youth with the same opportunities that were afforded to me when I was younger.

What has surprised you most about working for The Salvation Army?

Before I started working for The Salvation Army, I knew they did good work in the Twin Cities, but there were so many things I had no idea about. Like the absolute dedication of the officers – they live on nothing, and move at the drop of a hat. That’s real. That’s a true commitment to service.

Your predecessor was an officer who indeed “left at the drop of a hat” last month to help lead a Salvation Army rehabilitation center in Illinois. That leaves you as the first non-officer to lead Booth Brown since the facility was founded more than 100 years ago. Why didn’t they bring in a new officer?

This position has become so specialized that there wasn’t another officer who could directly take over right away. There are a lot of nuances to this job that go beyond typical officer duties.

Can youth homelessness be solved?

If we’re ever going to end youth homeless, we will have to solve big issues. Youth aren’t homeless by choice. They’re homeless because of systematic oppression; issues related to poverty; mental health stigmas; family conflict; and the like.

I think it’s important for people in leadership positions to have come up through the ranks. Part of being a good leader is knowing how to do all the jobs in the building. Although my title is program director, I do a bit of everything – from meeting with youth, to trimming hedges, to writing grants.

At heart, I’m a youth worker. So sometimes it’s hard being behind a desk. But every morning I can, I say hi to all the young people in the shelter, because I want to know everyone’s name. Maintaining connections is so important.

What’s the most rewarding part of your job?

Having young people know there’s a place where they’re safe. Youth who are experiencing homelessness live in a world that is inconsistent and frightening. Our job is to build relationships with them so they know there are people who they can trust and who care about them.

Often times, Booth Brown House is a youth’s first call when something exciting has happened. Just this morning, a youth who has been struggling with finding a job landed a job, and their first call was to their case manager.

And it’s always awesome to see the look on a young person’s face when they get their own apartment. After being homeless and after staying in our emergency shelter for 30 to 60 days, when they finally get their own place, they are so happy. Those moments are really great.

What are your goals?

To maintain a strong program and increase public awareness about youth homelessness, based on principles that we know work well.

We want to continue showing youth how they’re amazing and how they can be successful. Every youth who walks inside our doors really is so resilient. It is not easy to be homeless; our youth are smart and talented. Often times, youth just need someone to walk alongside them and help them realize they are worthy of good things.

I really want to say, too, that it’s a distinct honor to work with my team. Booth Brown House is blessed with a dedicated and talented team that really values honoring young people and their experiences. And we’re lucky to have been taught by Major Arnel Ruppel, former Administrator, and to have so much support from people like Major Jeff Strickler (former director of Booth Brown House), Terry Hildebrandt (Twin Cities social services director) and all of the team at our Divisional Headquarters.