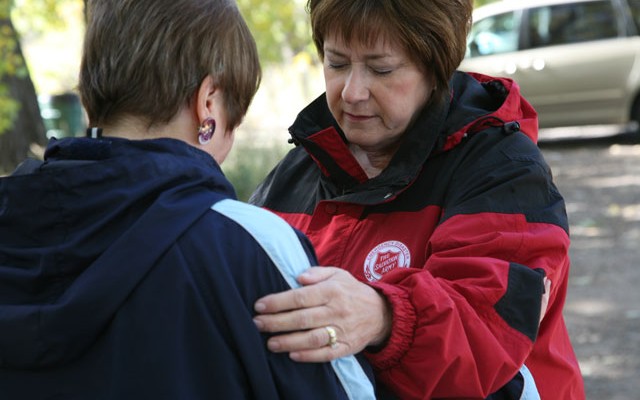 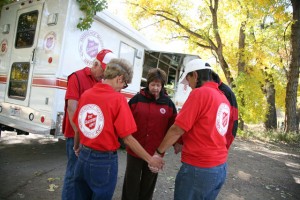 In the last four years, Colorado has endured its five biggest natural disasters in the state’s history. In response to these floods and fires, hundreds of Salvation Army volunteers rallied around the injured communities, ready to help wherever they were needed in whatever capacity. It’s the charitable nature of volunteers to enter a disaster without an agenda, though there’s always someone with the unenviable position of orchestrating the relief effort; a 24/7 leader with a both on-the-ground and eagle’s-eye view of the disaster, thinking both short-term and long-term in an unpredictable situation.

For the last five years in the Intermountain Division that person has been Sherry Manson—“Strong Sherry” to her friends and family. As the emergency disaster services (EDS) director based in Denver, Colo., Manson oversees disaster operations across Colorado, Utah, Montana and Wyoming. In 2013, her team—including more than 300 trained disaster volunteers—responded to five disasters, including two major forest fires and a near catastrophic flood, logging nearly 482,000 disaster worker hours.

“Sherry’s very good at forward thinking and problem solving,” said Ken Cavallero, EDS coordinator for the Western Territory, who has worked closely with Manson over the last few years. “She brings a calmness into the room; it’s her presence, her personality, being so outgoing with people on the disaster site. She’s not afraid to get her hands dirty. She won’t ask a disaster worker to do something that she’s not willing to do herself.” 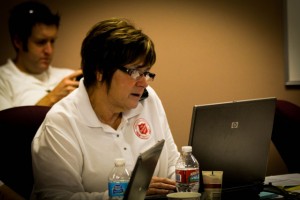 In a warm Oklahoman accent, Manson said she has always had a passion for helping people. “I didn’t think I would like this job as much as I do,” she said. “When I was hired, Colorado wasn’t experiencing the disasters they have since.”

From the unpredictability of the September 2013 floods that resulted in over $1 billion in damages and 7,000 contacts to Manson’s office or a number of destructive wildfires that destroyed countless homes, it’s difficult to predict what form Manson’s job will take from day to day. She could be on the phone organizing meals for a search and rescue team, or wearing rubber boots while comforting a family re-entering the remnants of their waterlogged home.

“Sherry doesn’t have a panic mode,” said Daniel Ball, Manson’s assistant. Ball worked for the federal fire fighting service before joining The Salvation Army, and said that Manson’s tolerance for high-stress chaos makes her the perfect leader in these situations. She recently received a “Sleeves Rolled Up” award from The Salvation Army’s National Headquarters, recognizing outstanding work in EDS.

As a mother of three, Manson said she employs those skills when dealing with a crisis. “I care very much about my staff and my volunteers, making sure they’re okay, because we’re working long hours,” she said. “And to make sure they’re okay emotionally, because sometimes we see a lot of chaos and trauma. I think a motherly instinct kicks in during those moments.”

The moments following a disaster are always well documented by the media, yet a crisis quickly fades from public awareness. For the survivors and for Sherry Manson, there’s often a long broken road ahead. In response to many ongoing needs, Manson added the responsibility of service extension director for the division to spearhead providing assistance to communities attempting to rebuild months and years into the future.

“In Jamestown, they still don’t have running water up there,” Manson said, explaining that the flood waters destroyed the roads in September 2013, and there wasn’t time to fix them before the winter. “A lot of people’s homes survived, but they couldn’t go home because they had no water. So The Salvation Army helped them buy water cisterns, and that’s helped keep the community going.”

Providing everything from prayer, to gift cards or a warm meal, Manson said she and her team always aim to be flexible and available to whatever needs are not being met after a crisis. Cavallero acknowledges that it’s Manson’s scrupulous attention to detail that not only makes for a functioning disaster relief operation, but also gives the survivors a strong sense of being cared for.

“Some people will have a job that’s, say, washing out a sink, and that’s all they’ll do, and they don’t care if the floor is dirty or the trash is full,” he said. “Sherry’s the type of person that will wash out the sink, scrub the floor, empty the trash, make sure everything’s done. That’s the type of person she is.”

Tags: Volunteers, Doing the Most Good