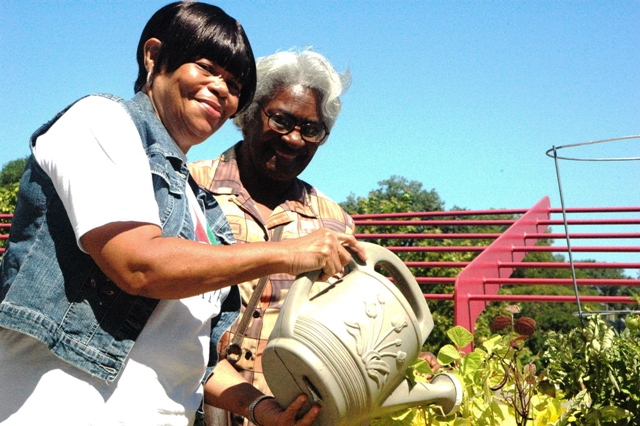 Englewood may be known as a food desert, but a group of spunky senior women is growing their own bumper crop of fresh fruit and vegetables in containers at The Salvation Army’s Red Shield Center.

The third-floor balcony at the corps community center had housed a rain barrel for some time, providing a ready water supply for a future garden. The Red Shield Center’s corps officer Lt. Nikki Hughes researched small-space gardening and discovered milk crate gardening. It’s an easy and inexpensive method using common square milk crates partially lined with plastic so that water is drawn down into the potting soil rather than leaking out the sides.

Lt. Hughes enlisted the help of Bea Jasper, a 55-year Englewood resident who is a passionate gardener and active in community affairs. Jasper showed seniors from the Red Shield Center’s Tuesday and Thursday drop-in program a video on milk crate gardening, and the group quickly got on board. 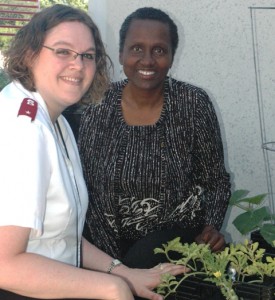 Other than their late start, the biggest challenges the gardeners faced were weather related. They learned to compensate for the drying effects of higher winds on the third floor than on the ground and have lost a few delicate plants due to the downpours in the late summer.

Dubbed “The Tea Room Garden” because it is decorated with a charming collection of tea cups and a place for the ladies can enjoy a pot of tea, the project has proven quite popular. Attendance at the Thursday drop-in program has doubled since the garden’s launch, and now more than 20 women participate in a typical gardening session.

Englewood resident Pearl Thompson, 76, is a long-time gardener. “I’m from the South. I’ve always grown tomatoes and herbs.” But this is her first foray into container gardening. Thompson looks at this program as an opportunity to learn something new and a satisfying social experience. “This is something I can do at my home.”

Gage Park resident Alberta Walker, 76, has been involved for many years with The Salvation Army is happy to see the container garden take off. Walker gardened when she was younger, but not in recent hears. Container gardening just might lure her back, she says, preferring the home-grown alternatives to tasteless store-bought tomatoes. She also finds working in the balcony garden a way to make new friends. 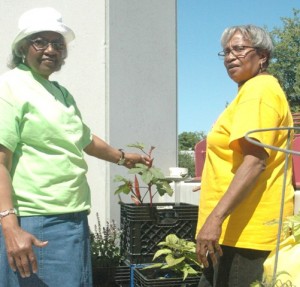 When Gresham resident Brenda Randle, 63, retired two years ago, her sister Doris, a receptionist at the Red Shield Center, suggested she start attending the senior drop-in program. She’s been a regular ever since, involved in a variety of activities from a book club to her current passion with the balcony garden.

Randle has gardened in her yard at home, but this is her first experience with container gardening. “I’d seen it on TV before and was fascinated,” she said, “but couldn’t quite figure out how it worked.” Now she looks forward to each week to see “what’s popped up.” Randle is looking forward to an earlier start next year and hopes for a bigger program that will draw more ladies.

Next year’s plans include an expanded range of vegetables and fruit to be planted in the spring. This year’s bounty has been dispersed by the senior gardeners to family and friends, but next year Lt. Hughes says she expects some of a larger harvest going to the corps’ food pantry.

Jasper arranged for the balcony garden to be a featured stop on the American Community Garden Association’s tour of Chicago neighborhood gardens in August during the national group’s 35th annual conference. A group of ardent gardeners from all over the country visited the balcony garden, enjoyed a cup of tea, and raved about what they saw. They were so impressed that a second ACGA tour was planned for September.

Learn more about The Salvation Army Metropolitan Division at http://www.salarmychicago.org/.