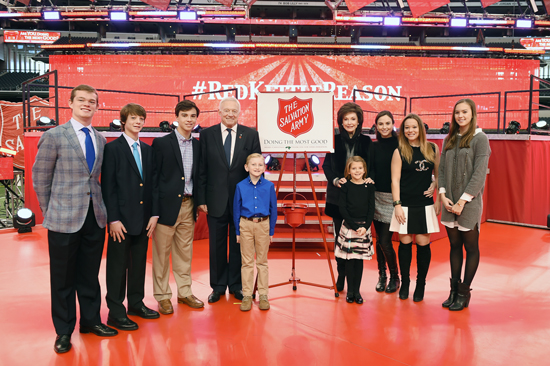 The Dallas Cowboys kicked off the 124th annual Salvation Army Red Kettle Campaign today when the Jones family made this season’s first official kettle donation at halftime of the Cowboys Thanksgiving Day game against the Philadelphia Eagles.

For the past 18 years, the Dallas Cowboys have helped The Salvation Army kick off the campaign, which has raised more than $1.8 billion in that time.

For the official campaign kickoff, Jerry Jones, owner of the Dallas Cowboys, and wife Gene made their annual “kettle drop” – which is the inaugural donation to the Red Kettle Campaign – at the start of halftime.

The Jones family has made the kettle drop each year since 1997, when the Cowboys and The Salvation Army began their partnership. The focus of this year’s national Red Kettle Campaign is to encourage Americans to share their reasons for giving by using #RedKettleReason in social media posts.

“I choose to support The Salvation Army because the Army is a great team of people who are fighting to make a difference in the lives of those who need it most,” she said. “The Salvation Army is close to my heart, and my family has worked with the organization for decades. #RedKettleReason is a great way for people to recognize and talk about all the good the Army does to serve America’s most vulnerable all year long.” 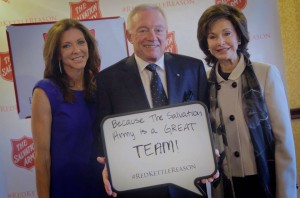 Anderson also serves as chairman of The Salvation Army’s National Advisory Board alongside fellow board members Gene and Jerry Jones.

Here are a few more ways you can get involved with our Red Kettle Campaign:

With the annual campaign officially launched, starting tomorrow nearly 25,000 bell-ringers will take to storefronts nationwide to collect coins, dollars and the occasional gold tooth from donors. Generous passersby can be assured that all donations will stay in their local community to help The Salvation Army meet the physical, material, emotional and spiritual needs of the area’s most vulnerable.

From its humble beginnings as a San Francisco donation collection by Salvation Army Captain Joseph McFee in 1891, the Red Kettle Campaign has grown into one of the most recognizable and important charitable campaigns in the United States. It provides toys for kids, coats for the homeless, food for the hungry and countless social service programs year-round.

*A one-time donation of $10 will be added to your mobile phone bill or deducted from your prepaid balance. Message and data rates may apply. All charges are billed by and payable to your mobile service provider. Service is available on Verizon Wireless, AT&T, Sprint and  T-Mobile. All purchases must be authorized by account holder. By participating, you certify that you are 18 years or older and/or have parental permission. Donations are collected for The Salvation Army and subject to the terms found at igfn.org/t. Privacy policy: igfn.org/p. Text STOP to 80888 to stop; Text HELP to 80888 for help.