The Salvation Army is Empowered by the People of Beaufort, SC Following Hurricane Matthew

The Salvation Army may be handing you the plate, but that food has been provided by many people in many ways

When a disaster the size of Hurricane Matthew comes around, every available person is called in. For The Salvation Army, that includes pulling Canteens (mobile feeding units) and feeding crews from places as far as Texas to the aid of those affected by the storm in Florida, Georgia and the Carolinas.

Lieutenant Heather Dolby, along with her volunteer crew-mates Amy and Michelle, was one of those people. She traveled from her home in Anderson to serve in Beaufort, South Carolina, more than 200 miles away. What she found when she got there was a community ready to come together and get to work. 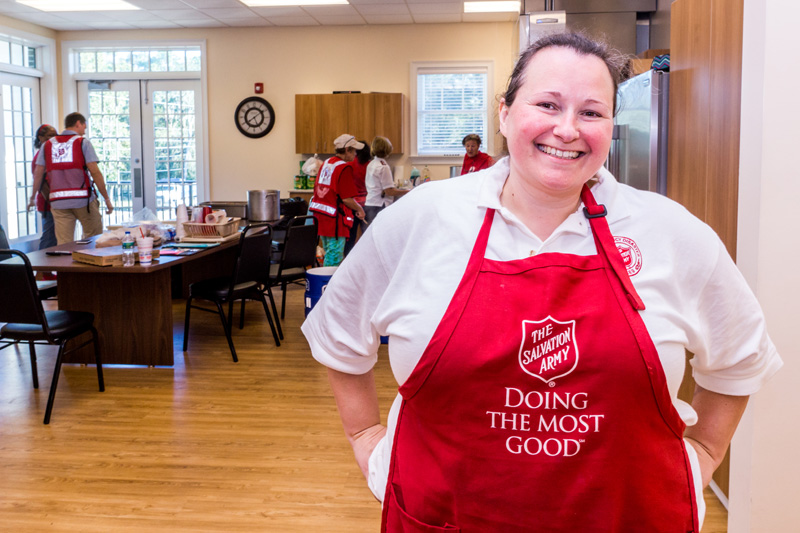 At first, Lt. Dolby and her crew were feeding the 120 first responders working in the Emergency Operations Center (EOC). When the EOC asked if Lt. Dolby’s team could provide meals for an additional 400 people in shelters three times a day, EOC staff reached out to the Beaufort Fire Department asking if Lt. Dolby’s team could set up shop in the large kitchen there. The request was immediately accepted and food donations poured in from Publix, Bi-Lo, Food Lion, Sam’s Club and others.

When the power went out at the hotel the team was staying at, Mike, a hotel employee, walked to a nearby hotel the next morning, made a large vat of coffee and walked it back to the hotel so Lt. Dolby’s team and other first responders would have hot coffee to start their day.

After Lt. Dolby’s team had been providing three meals per day for about a week, Leslie, the pastor of one of the Beaufort Salvation Army volunteers, volunteered to do the teams’ laundry. And the support just kept coming.

Joni Dimond lives on Hilton Head Island and spent nearly a week at the Red Cross shelter at Bluffton High School, one of the shelters Lt. Dolby’s team was providing meals for.

“During a storm like this, people start coming together to make it work,” she said. “Everyone wants it to work, and everyone is more apt to put forth the effort in a serious event like this.”

That became even more apparent as shelters started to close. Lt. Dolby and her team started to feel as if there had to be more people that needed meals that weren’t at shelters; people they were missing. So they prayed for a way to find them and provide some relief.

“We just want to feed people!” she said. 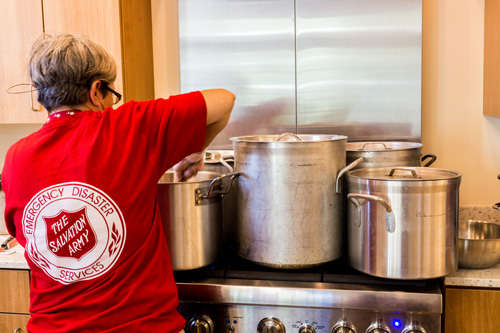 The next day, a church reached out to them asking if Lt. Dalby and her team could provide 500 meals so they could feed those in their community that still needed help. The Lord had provided Lt. Dolby’s team with the solution to their desire to continue to serve.

Five more churches got involved, and now plans are in the works to continue the multi-faith feeding initiative, providing food, love and a safe place for members of the community that are still in need of physical, emotional or spiritual support.  Lt. Dolby calls it “Catering to the need in your community.”

“Jesus is the glue that holds this bad boy together,” she said. “We’re just the springboard. My team will disappear, back to Anderson. But why not teeny tiny Beaufort, South Carolina, to have something great start, from a cup of soup to turn into something great for Christ?”

To give to The Salvation Army's Hurricane Matthew relief efforts, please go to salar.my/HurricanMatthew, or call 1-800-SAL-ARMY.