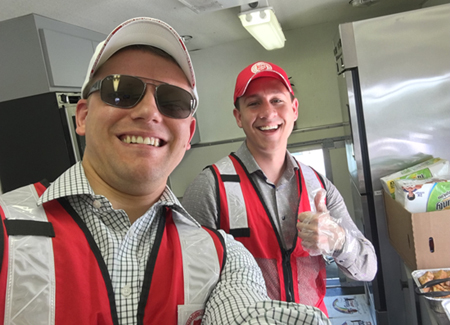 Hi. I’m David (White hat, on the left). I spent most of yesterday inside the police lines of a federal crime scene investigation area. While my experience isn’t unique, a few things stuck out to me that are worth noting.

The shooting at the congressional baseball practice on June 14th happened less than a mile away from my office in Alexandria. I get CNN notifications to my phone about tragedies all the time, but it’s not every day I recognize the location as “on my way to work.”

Before yesterday, I’d never crossed a police line. Most people haven’t. The area was locked down quickly following the incident and I saw several people turned away at various police checkpoints. But when I approached with a red vest and white hat, both bearing a Red Shield with the words “The Salvation Army Emergency Disaster Services,” I was waved right on through.

I’ve been to disaster areas with Salvation Army EDS teams before. As an employee in the communications department at The Salvation Army USA National Headquarters, I was deployed to North and South Carolina during Hurricane Matthew in October, 2016. My job was to talk to people and tell the story of those affected by the storm and of The Salvation Army working to help them.

Yesterday was different, though. This time, while I’m still an employee, I was there as a volunteer. And this time, everyone coming for food was a first responder. I handed out water and Gatorade. I served food from a canteen (mobile feeding truck, and a first for me). I chatted with FBI agents (another first for me). I thanked them, I praised them, I fed them, and then I watched them get back to work. That’s all.

While there, however, I was twice punched in the chest (figuratively). The first punch came when I realized that while The Salvation Army was the organization on-site handing out the food, the food was provided by local restaurants from around town. We bought the drinks, but the barbeque sandwiches, salads, wings, jambalaya, pizza, and more, were donated by the community. In a time when tensions are high and social media conversation is nothing short of explosive, a community was coming together to serve those trying to figure it out and set it right. 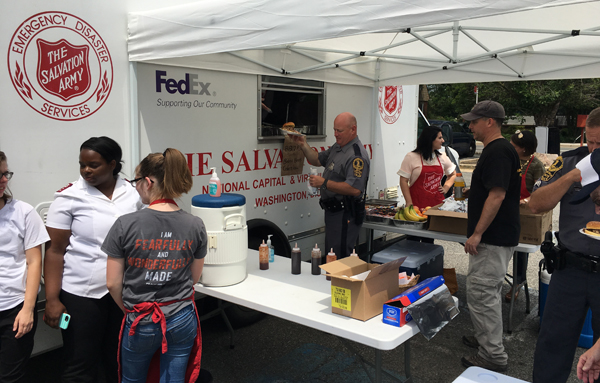 The second punch came with the appreciation expressed by the first responders. The level of genuine gratitude was humbling. It sometimes came in the form of “You guys make this job bearable,” or “This would be so much more miserable if you guys weren’t here.” But it was never a simple “Thank you.” It was always accompanied by a “…so much for being here” or “…for everything you guys do. I mean it.” And each time I heard it, handing out bottled water seemed more and more like the best job in the world.

But here’s the kicker: that’s what it’s like every time, all over the world. I’ve worked for The Salvation Army for almost a year, and I’m learning more every day, but The Salvation Army responds with the same passion and support whether it’s in Alexandria, Dallas, or Snohomish, whether the news media is there or not. Our first responders deserve it, so we’re there, whenever there’s a need.

There’s real power in service. First responders get that. They’ve dedicated their careers and lives to serving, and it’s a real honor to have the opportunity to serve them back in some small way. I highly recommend, if the chance ever comes your way, that you take it. I have yet to regret a time when I did.

If you’d like to volunteer with your local Salvation Army, throw your zip code in the search bar at www.SalvationArmyUSA.org to find their contact information. Give them a call. You’ll be glad you did.