The Salvation Army’s Emergency Disaster Services is on the scene serving those affected by the one of the most devastating floods in West Virginia’s history. The widespread flooding has killed 23 people and left thousands homeless. Our Maryland & West Virginia Division, a long with staff from other divisions, has provided more than 6,600 meals, almost 3,400 snacks, and more than 7,500 drinks to the flood survivors and emergency responders. 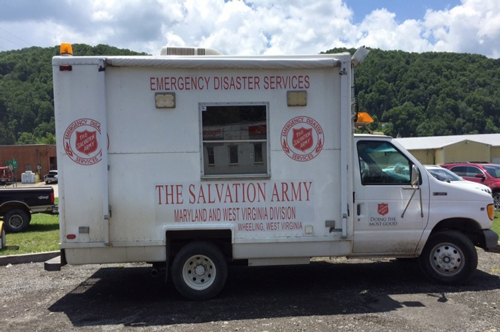 We’re working with other disaster partners and with Senator Joe Manchin’s office to hand out FEMA assistance applications for flood victims in Clendenin, West Virginia. We’re also grateful for partners like Moose International, whose Charleston location is serving as a clearing house for in-kind donations to The Salvation Army during this recovery effort. The Beckley, West Virginia Moose Lodge is sheltering Salvation Army Canteen volunteers serving Greenbrier County, West Virginia. In addition Moose Lodges throughout West Virginia, Maryland, and Delaware are collecting canned and dried food, cleaning supplies, pet food, baby supplies, and other assorted items.  These will be delivered to the Charleston and Beckley Moose Lodges for distribution in the flood zone by The Salvation Army.

We’re anticipating widespread distribution of cleanup supplies and for case work to begin after July 4th.

Our hearts and prayers are with those who have been affected and have lost loved ones. To help The Salvation Army’s efforts in serving those affected by the flooding you can:

To learn more about The Salvation Army, go to www.salvationarmyusa.org.