A Bike Ride Across America

for a Great Cause! 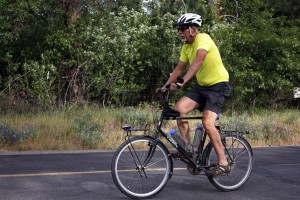 Major Martin Cooper, who recently retired from a distinguished 15-year career of service with The Salvation Army, recently completed a 2,700-mile bike ride across the U.S. from Oregon to Washington, D.C. to raise awareness and funds to combat homelessness and hunger.

Cooper embarked on his ride from Medford, Oregon on May 15, 2015. After travelling through nearly 66 towns and cities in Oregon, Idaho, Wyoming, Nebraska, Iowa, Illinois, Indiana, Ohio and Maryland, he reached Washington, D.C. on June 20.

Cooper carried his own supplies and funded his own trip. “Homeless people don’t have the luxury of a warm house and hot shower, and I rode in solidarity with them,” he said. “I have been uplifted by the kindness and generosity of those I met along the way, and this gives me hope that as a society we can raise up the least among us.” He documented his trip on his Facebook page, sharing stories about people’s kindness and generosity along his way.

Cooper faced hail storms, tornadoes and generally rough weather from start to finish. He said it was a very challenging experience, especially at 66 years old, but that even in this weather, homeless people are on the streets struggling.

The Salvation Army offers group homes, emergency shelters, and transitional living centers that provide housing, food, and overnight lodging for varying amounts of time to those in need. According to its 2014 Annual Report, nationally The Salvation Army served almost 60,000,000 meals and provided lodging for almost 11,000,000 individuals.

“As I look back over my career I am struck by the need that exists in America,” Cooper added. “Over the years, I have worked with The Salvation Army to help hundreds of thousands of people in need, including the homeless, the hungry and those suffering from substance abuse. There is still so much to be done.” 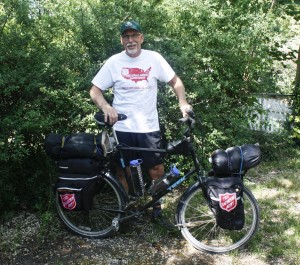 Cooper said he was glad to have completed the journey, and that it was a life changing experience. He concluded his trip by donating his bike, tent, sleeping bag and all supplies to the homeless people he met a long the way.

Congratulations to Major Cooper on his amazing trip. Check out more photos from his journey here and visit his FaceBook page, Bike Across America to End Hunger.