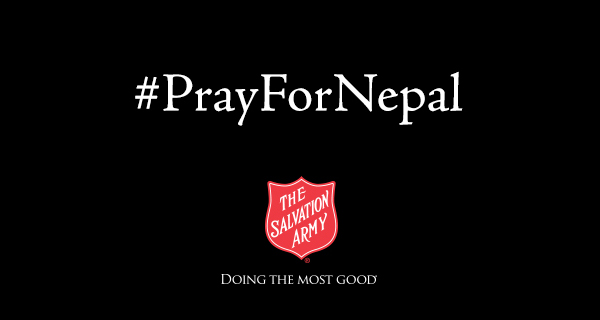 A magnitude 7.8  earthquake struck Nepal early on the morning of Saturday 25 April, devastating the capital region of Kathmandu. Early reports suggest that more than 3,400people have died and communities and businesses have been destroyed. This is the worst earthquake to hit the area since 1934, when a reported 10,000 people lost their lives following an 8.2 magnitude quake.

NBC News reports that ‘just a week ago, about 50 earthquake and social scientists from around the world came to Kathmandu, Nepal, to figure out how to get that poor, congested, overdeveloped, shoddily built area to prepare better for the big one, a repeat of the 1934 temblor that leveled the city’.

Nepal is a country that has struggled with high unemployment, poverty and hunger for many years. In response to this weekend’s tragedy, General André Cox is calling on Salvation Army territories, commands and regions, as well as individual Salvationists and friends of The Salvation Army, to support the organisation’s #NepalEarthquake appeal by making financial contributions to support the relief effort underway in Nepal. ‘On 26 April 2009, the work officially opened in Nepal. The Salvation Army is present, we are known, and we have a responsibility to step up and support the relief and rebuilding efforts, and I am inviting Salvation Army leaders around the world to support this appeal,’ said General Cox. The disaster has also impacted the only local Salvation Army officers in the area as their house was destroyed in the quake and they are now living out in the open, like so many other survivors.

In his Sunday devotional posted on Facebook, the Army’s international leader also called on Salvationists to pray for the Nepalese people: ‘Please pray for peace and comfort for those who mourn. Pray for the injured that they might be healed. Pray for the first responders and hospital workers who are working in difficult and dangerous circumstances.’

The Salvation Army’s disaster response efforts are being coordinated by the India Eastern Territory and the territorial commander, Commissioner Lalngaihawmi, is also requesting support from territories around the world. Damaris Frick, a member of the International Headquarters (IHQ) International Emergency Services team, is en route to Nepal to support local officials and to assess how best The Salvation Army can respond in partnership with other agencies already on the ground. Members of the IHQ Communications Section will be in the region in a few weeks and will endeavour to provide a first-hand account of the Army’s response through the lens of communication platforms.

Click here to make a donation in support of The Salvation Army’s #NepalEarthquake appeal.